skip to main | skip to sidebar

Cebupacific (Airbus) A320 Family slides off the airstrip at Davao airport. 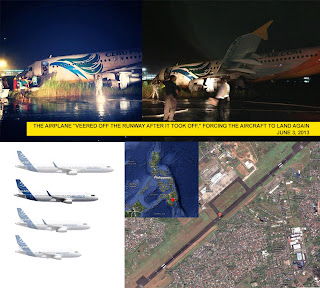 The Airbus A320 family consists of short- to medium-range, narrow-body, ... It ranked as the world's fastest-selling jet airliner family according to records from ..... a reduction insafety or an increase in the crew's workload during the final flight ...

(Updated 10:11) A Cebu Pacific aircraft skidded off the runway of the Francisco Bangoy International Airport in Davao on Sunday night, the airline's spokesperson said. The airplane "veered off the runway after it took off," forcing the aircraft to land again, Cebu Pacific's spokesperson, Candice Iyog,
said in a phone interview. All the passengers were safely disembarked, she added. — DVM, GMA News